Why We Chose the Doberman

I had other breeds before I found out about the Doberman. A Saint Bernard, sweet but very big and hairy! The German Shepherd, another very nice breed, but for me, hairy with a tail that knocked things off my coffee table and chased my horses! In 1978, I was a divorced mother, living in an apartment in the city. I wanted a dog, a companion for my son and protection for me. I saw an ad in the local paper for Doberman puppies. I didn’t know much about the breed. I liked the fact that they had short coats and no tail! And, everyone knows that they are “protection” dogs! My son and I went to pick out a puppy.

The “breeder” we went to turned out to be a very distressed woman, who’s son left his dog in the garage and took off. She knew nothing about dogs. The poor dog had litter of puppies and the woman was just trying to get rid of them. We went into the cold garage to see the puppies and what I saw, broke my heart. A very thin, young, sad looking mother dog with three puppies about 7 weeks old. I could see just about every bone in the mother dog’s body. I asked the women what she was going to do with the her. She told me I could have her along with all of the puppies for a very good deal! We took “Carla” and her 3 pups home with us.

I ended up selling all of the puppies to good homes and keeping Carla. She became my shadow. I thought she was just grateful for us rescuing her but later found out that it is a trait of the Doberman breed, they love their people. Carla would sit her back end on the couch and watch TV with my son. A real couch potato, another Doberman trait! We took her often to a local park where my son played. She would keep an eye on both of us. If anyone came near either one of us, she would stand between them and us and lift her lip. I certainly did not train her to do this, it just happened. I got an evening job and Carla would come with me and stay in my car while I worked. I would go out on my breaks and take her for a walk. When I came out at night, it was comforting to know that she was in my car, my constant protection. Carla was a wonderful dog. Unfortunately, she developed Wobbles and had to be put down a couple of years after she came to us, she was only 4 years old. It was one of the hardest things I ever had to do. Both my son and I were devastated. Carla was so special to us. How could we ever replace her? But what I realize now is that she was sent to us so that we could see what a wonderful breed the Doberman is. To honor her, we purchased another Doberman in 1980. This time from a reputable breeder, who understood the importance of health testing his dogs. I have learned a lot since then and have had Dobermans ever since. 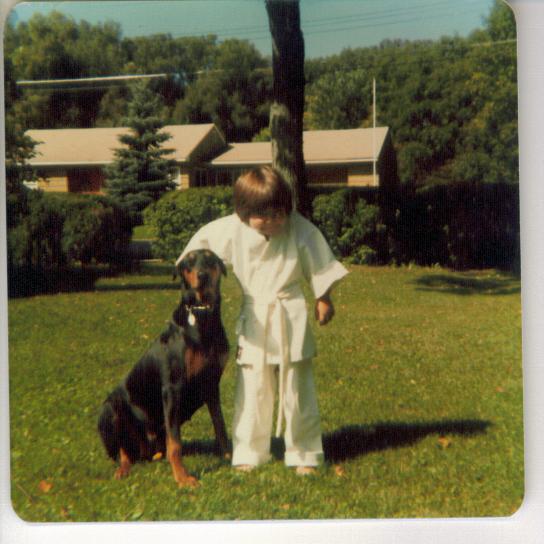